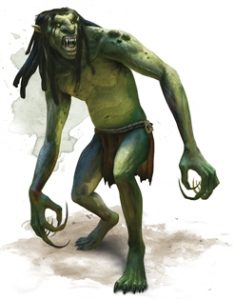 Based on the old fairytale, this adventure turns an old story trope on its head. This adventure can be adapted for any age or level characters.

Joacob Potter, the mayor of the small village of Homlin, is offering a reward of 500 gold pieces to anyone that can remove the trolls from under the bridge that spans the deep canyon on the road to the city of Makersburg. Mayor Potter will tell any adventurers that respond to the offer that three trolls have taken control of the bridge and they charge traveler 2 silver pieces to cross. The bridge is the only way to cross the canyon. The next closest crossing is one day’s walk to the north.

In reality, the trolls are handy craftsmen and stone masons and built the bridge for the town of Homlin. They were promised payment of 1,000 gold, but the mayor did not have the money to pay them once the bridge was completed. In fact, the mayor only has 250 of the 500 gold he has offered as a reward for removing the trolls.

The trolls are Ogg, Bog and Larry. Unlike most trolls, they are lawful neutral in alignment, meaning they keep their word and they will do whatever they feel is necessary to collect the money they are rightfully owed for building the bridge. The trolls are charging travelers a toll to cross the bridge in order to get paid. The trolls would happily leave, if they get paid the remainder of what they are owed. So far, they have collected 750 gp worth of tolls, more than half what they were promised by the Mayor Potter.

If the adventurers arrive during the day, they will find it quite busy with traffic flowing from both directions on the new bridge. One troll is on each side of the bridge collecting the tolls and the third troll can be found under the bridge guarding their belongs and cooking dinner.