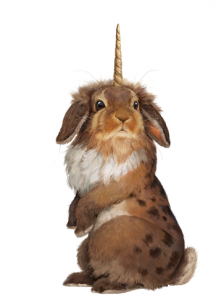 The following is collected from numerous official and less than official sources and topped with a little DMingDad homebrew spice. Enjoy. The al-mi’raj is a Chaotic Neutral and intelligent rabbit. “Al-mi’raj” apparently means “experiment 72” in Gnome, suggesting that this creature was made by tinker gnomes. That is definitely reconed: Dragonlance hadn’t been developed when the al-mi’raj made its first appearance. Al-mi’raj have a magic resistance and 10% have psionic powers, including powers like Detonate or Control Flame. Also, they can blink like blink dogs and try to stab people that scare them. Al-mi’raj are immune to poison and their horn can in fact be used to cure poisoning. Al-mi’raj are able to burrow at a speed of 20’ due to their horn’s magical ability to mold earth per the cantrip, description below. Al-mi’raj are quite common in the Feywild, considered a garden variety animal. In Toril, are were common in Zakhara. When merchants from that land began to trade with Chult, they brought with them the almirajes to the Chultan Peninsula. Al-mi’raj are fearless, easy to tame, and incredibly faithful to their masters. Spellcasters often seek them to make them their familiars. When forced to fight, they could be quite dangerous, ramming against their enemies, stabbing them with their horns. Almirajes are intelligent enough to fight using simple tactics, such as burrowing to move unnoticed and attack an enemy by surprise. Charge. If the al-mi’raj moves at least 20 feet straight toward a target and then hits it with a horn attack on the same turn, the target takes an extra 1d4 piercing damage. If the target is a creature, it must succeed on a DC 10 Strength saving throw or be knocked prone. Combat Actions Horn. Melee Weapon Attack: +4 to hit, reach 5 ft., one target. Hit: 1d4 + 2 piercing damage. Teleport. The al-mi’raj magically teleports, along with any equipment it is wearing or carrying, up to 40 feet to an unoccupied space it can see. Magic Resistance. The al-mi’raj has advantage on saving throws against spells and other magical effects. Al-mi’raj familures and some wilde al-mi’raj have limited psionic abilities. Such an al-mi’raj has the following traits. Innate Spellcasting (Psionics). The al-mi’raj’s spellcasting ability is Wisdom (spell save DC 11, +3 to hit with spell attacks). It can innately cast the following spells, requiring no material components: SPECIAL NOTE: If startled/terrified, the psionic variety have an unfortunate tendency to explosively detonate. Mold Earth Choose a portion of dirt or stone that you can see and fits in a 5-foot cube. You change it in one of the following ways: If you cast this spell multiple times, you can have no more than two of its non-instantaneous effects active at a time, and you can dismiss an effect as an action.